Swansea City’s Garry Monk has stated on numerous occasions that the Spanish forward Michu does not play any role in his plans and that the 29 year old attacker is not expected to perform for the Premier League club in this entire new season. West Ham have been linked.

The career of Michu has slowly taken a turn for the worst as the Spanish attacker made a huge splash in the Premier League during his debut season in Swansea City when he managed to score 22 goals in his first season and helped the Premier League club in winning the Capital One Cup. 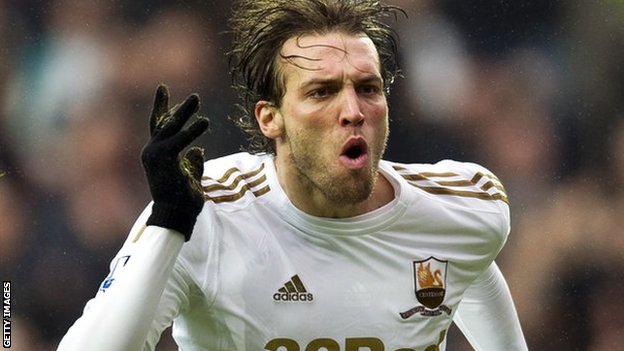 Things began to fall apart for Michu when he picked up an ankle injury and had an underwhelming loan spell with the Italian outfit Napoli.

Michu has a contract with Swansea City which expires in 2016 but his stay at the Liberty Stadium will be ending sooner than what his deal states as the Spanish attacker no longer plays any important role in the Premier League outfit. The latest odds according to StanJames betting suggest he will end up playing back in Spain from January.

When Garry Monk was asked about the possibility of Michu remaining as a player of Swansea until the end of his contract, the English manager replied by saying: “There’s always a possibility. He’s not part of my plans going forward. Michu made his decision last season to try and go on and further his career elsewhere and it’s the same situation now”

“Whether the window shuts it’s an ongoing situation where we’re trying to find the right solution for him. We want the best for him because we’re very thankful for what he’s done for the club”

Persistent injuries have halted the progression and development of Michu and despite what he has accomplished with Swansea City in the past, there is no place left for him in the Liberty Stadium and even if Michu does remain with the Premier League club for another season, Monk has reiterated that the Spanish player will not be given any playing time at all.

Previous Post: Tony Pullis says that his opening loss of the season was his own fault
Next Post: Slaven Bilic has heaped praise on Manuel Lanzini